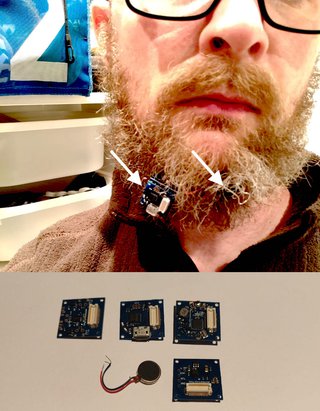 Hair follicles have tactile sensors. It's a shame we can't make use of them when communicating with our tech... that's where this idea came in. Via gear I had recently got hold of from https://tinycircuits.com/, I assembled a tiny Arduino, battery pack shield, dual-motor shield and 3-axis compass shield, plus vibrating motor, and hair-clipped this into my heard. With a little code, I got the Arduino to vibrate my beard when I was facing north.

This was a few years ago. I did a little search and was surprised to find that Wired had covered the Hackathon where this project was constructed at. This project was covered too. The below (in the Wired article too), is a pic of me wiring up a judge up with a prototype of the device.

The main issue with the device was that you had to have tension 'on the hair' in order to feel vibrations. This was a bit uncomfortable. Perhaps with a longer hair, that you could braid perhaps, this would not be an issue.

Another issue was that the vibration was annoying if it was constantly on! Tactile sensors in the skin only 'activate' upon change (if I recall... many years since I studied this) -- I suspect only vibrating upon orientation change would be more acceptable.