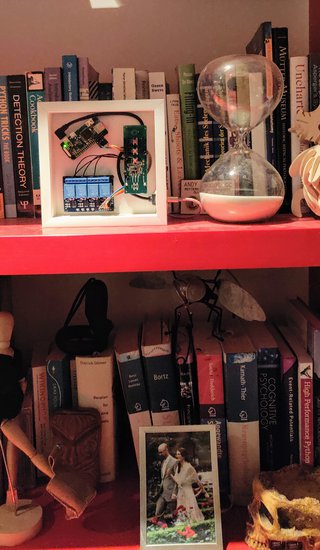 I need to be careful with sunburn, so we installed an electronic sun-blind that extends out from the house to cover part of our garden. I was excited to hear from the people who we bought the sun-blind from, that we could control it with Alexa. It was not mentioned we would need to buy a £250 device to link the blind with Alexa. I decided to build my own device for £30.

This was straight a straight forward project and just required connecting up simple circuitry to control the buttons on the remote (that I took to pieces and soldered wires onto, to allow me to control its push buttons via the pizero).

I used Flask-Ask on another pizero (see my pi-parking project) that in turn contacted this pizero to control the relays which in turn controlled the sunblinds. I used Quart, not Flask, because I needed to be able to stop the blinds rolling out after 0-10 seconds (specified by the Alexa command), which required Async to allow the app to immediately reply to the Alexa backend, and then, at a later time, stop the blinds from moving. I guess I could have used Celery-Beat to achieve the same goal, but using aync was the simpler option.

I'll write another blog on setting things up in the Alexa-console backend. It was tricky and not that intuitive. Despite that, it was a far better experience than I had setting up a similar project (pi-parking) but with google-assistant. I perhaps spent an hour setting up the Alexa backend here, compared to 4, on that other project.

I have got a lot of joy out of this project. I've a spare photo-frame and am considering what to do for my next arty pi project :)